A journey of surprises to the east 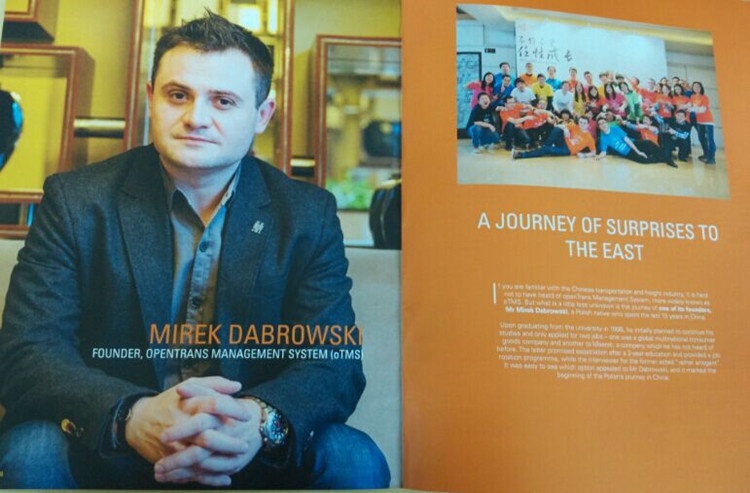 If you are familiar with the Chinese transportation and freight industry, it is hard not to have heard of openTrans Management System, more widely known as oTMS. But what is a little less unknown is the journey of one of its founders, Mr Mirek Dabrowski, a Polish native who spent the last 15 years in China.

Upon graduating from the university in 1998, he initially planned to continue his studies and only applied for two jobs – one was a global multinational consumer goods company and another to Maersk, a company which he has not heard of before. The latter promised expatriation after a 2-year education and provided a job rotation programme, while the interviewer for the former acted “rather arrogant”. It was easy to see which option appealed to Mr Dabrowski, and it marked the beginning of the Polish’s journey in China.

At the Starting Line

“My position with Maersk was something I did not actually plan, and it led me to China when the company sent me here upon graduation from their international management trainer programme (also known as M.I.S.E). I was actually unwilling to be here. A fellow Polish trainee was expatriated to Sao Paolo, Brazil, and at that time, I would have given anything to swap places with him,” explained the co-founder of oTMS.

Mr Dabrowski arrived in Beijing in September 2000, and was put on a 5-month full-time Mandarin intensive study in a group of eight trainees. However, initially, he did not put much passion and interest into learning the language.

“On hindsight, this moment, as well as a few others in my life, was a defining period in my life, although at the time I may have been frustrated by not having control over matters such as this. I thought I would just see out my three-year contract and leave China. But I soon found out that working in China was far more exciting than working in Poland, even though the latter was considered to be growing fast too. The working environment here is extremely vibrant and exhilarating,” said Mr Dabrowski.

For the first year, Mr Dabrowski worked at Maersk Line shipping office, before entering the warehousing & distribution unit of Maersk Logistics in his second year. In his three-year stint with Maersk Logistics China, he held six different positions before leaving the company for a position at DHL Solutions.

Learning the Twists & Turns of Logistics

Mr Dabrowski considered his five-year journey with DHL as even more exciting than his stint at Maersk, although his position has similar jobscopes. His role has evolved from setting up a team from scratch to going through various phases of growth culminated with an acquisition of Exel, including two years of post-merger integration.

“At the end, I was the last member of the both original DHL and Exel teams in China who was still in the Vice President capacity. I would have loved to stay longer but I was jaded with working in a large organisation where bigger teams and higher titles actually mean lower ability to make a meaningful impact,” explained the 40-year old founder.

That was when he took up a position at DSV, a Danish transport company offering road, air, sea and logistics transport services. Although he has not heard of the company before, a discussion with his then-future boss revealed the exact kind of opportunity he was looking for. He was given full autonomy, including P&L responsibility, to build up the company’s contract logistics team from a very small base. Although he “overestimated the difficulty to bring major clients early, or rather underestimated their aversion to risks of trying something new”, he still managed to triple the company’s revenue, which leaded to an increase in EBITA several times over, not considered a small feat especially in light of the 2008 financial crisis.

“Looking back, I was lucky to work in each of these companies in this exact sequence. For my first job, Maersk really invested heavily in young people and provided excellent development platform. Then I moved to DHL, which, as the largest contract logistics provider, is the perfect place for me to increase my professional level of expertise. DSV came at a momentous stage of my career where it provided me with a great platform for self-fulfilment with their excellent culture of no-nonsense financial results orientation,” said Mr Dabrowski.

Regardless of the several job positions he has held, he has been in the contract logistics industry until his business venture with oTMS in 2013.

Moving on to oTMS

Mr Dabrowski and his co-founder started oTMS to fulfil a major ambition – to transform the Chinese trucking industry and improve opportunities for both companies and indviduals by bringing common sense innovation there.

While all the necessary technology is already in place in China in 2013, the core process is fragmented and inefficient. As a result, both transport providers and transport users face serious challenges that will not go away unless common solutions are found. The idea is to connect shippers, third-party logistics providers, trucking companies, drivers and even consignees with one another and have a seamless ecosystem that allows mutual benefits and a shared workflow.

“oTMS was officially born in May 2011 when we pivoted away from exchange concept towards addressing much more practical and acute need for improvement in execution, track & trace and billing of transport shipments. The coding began in November 2011 using software development house in Poland and in January 2013, we went live with our first two paying customers – DSV and Bestseller (owner Jack & Jones, Only, Vero Moda and Selected brands), who was also DSV customer at the time. We were lucky to have great customers, colleagues and investors in our early years, as this was essential for every start-up,” commented Mr Dabrowski.

The company’s goal is to make this ecosystem into an open, yet trustworthy community, so that it will lead to more business opportunities. oTMS is not and never be a 4PL – just software platform – a utility that is available to everyone.