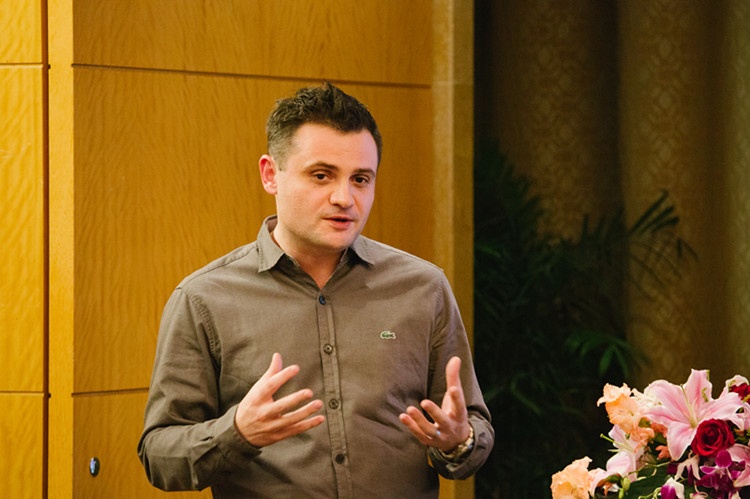 In this “information age”, where instant messaging and the use of sophisticated software tomanage data is becoming increasingly important, it is hard to imagine an industry worth 5.4trillion yuan ($871 billion) using e-mails to communicate and relying on Excel spreadsheets tostore information.

But the reality is that some of China’s largest business-to-business transportation industryfirms are still not making use of technology advances, resulting in higher costs and lowerefficiency, especially compared with similar companies operating in the United States andEurope.

It is this lacunae that has provided an opportunity for Poland-born Mirek Dabrowski to start hisown transportation software enterprise in Shanghai and shake the industry with a newconcept.

Dabrowski founded oTMS in 2013 after having spent 13 years working in China as a regionalmanager for several international transportation and logistics companies, including Denmark’sDSV A/S and Germany’s DHL Express.

Although he has no experience in software development, it was clear to him that the B2Btransportation industry in China needs a technological revolution.

“The idea of creating the software was driven by all the frustrations I suffered while working inthe industry. Especially in terms of how inefficient the system was and how slowly informationtraveled to the different parties involved in the supply chain,” said Dabrowski, the founder ofoTMS.

The software developed by his company uses the technologies of cloud computing andmobile Internet to connect every party in the transportation process, including shippers,trucking companies and drivers.

While the concept might appear simple, the idea has actually helped transportationcompanies save time and money.

“We created a product specifically for the characteristics and the realities of the Chinesemarket. The B2B transportation industry in China is still very fragmented and it is in a veryrudimentary stage,” said Dabrowski.

He said that China’s largest B2B transportation companies currently do not even usespecialized computer programs to monitor their deliveries. This translates into higherexpenditures and lower efficiency.

“We help companies to save costs, especially those related to administration procedures. Togive an example, before using our system it could take companies around 30 days to collect aproof of delivery. But now they can do it digitally with a mobile phone in a matter of seconds,”Dabrowski said.

Although he first imagined the concept in 2000, the lower Internet penetration and theabsence of smartphones did not allow for real improvements in the industry.

He said that back in 2000 his idea was just a vision, because it was not technologicallyfeasible.

But in 2011, all the components needed such as cloud technology, smartphones and mobileapplications were already there.

It was not until 2013 when the company went live with the product, that it gained its firstcustomers and received funding to grow the business.

“Back in 2013, not many people understood our concept and what we wanted to do. The mostcritical moment for us was to obtain the first round of investment. After that everything goteasier,” he said.

Last year, the company received its second round of investment of $6 million from searchengine giant Baidu Inc and private equity firms Matrix Partners and Buttonwood Capital.

“The reason we chose Baidu as an investor was because of its strong brand. Also, it wasimportant that they shared our vision and that they wanted to invest in companies that usedata to improve traditional industries”.

A hundred individual users and more than 120 companies in China are currently using oTMS.

The company’s largest customer is Danish retailer Bestseller A/S, owner of the Jack & Jones,Vero Moda and Only brands.

He said that the radical transformation undergone by the B2C transportation industry in Chinaindicates that a similar transition needed to be carried out in the B2B sector.

oTMS took the mechanism that had been implemented by express delivery companies andadapted them. The company believes that the imbalance between B2B and B2C shows thatthere is a very interesting market to develop in China.